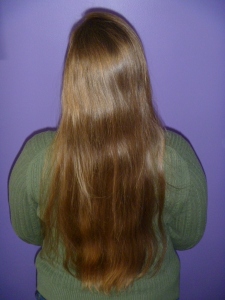 I have been thinking about cutting my hair for quite a while, and decided that the time of transitioning to a new year is as good a time as any to go ahead and do it. It’s a big change, and I have a few different reasons for making it.

First, on a completely practical level, less hair means even less time taking care of hair. I will have to get it cut more often, of course, but I will save a little bit of time by simply not needing to wash, condition, and dry my hair. And more importantly for me, right now, having extremely short hair will take away one small impediment to getting back in shape. The thought of getting my head sweaty and having to wash my hair makes exercise just a bit more daunting. With my hair as long as it was, I only washed it two or three times a week, usually on days when I would have time to let it air dry, since I’m not crazy about blowing hot air at my head for several minutes. This new “do” should take about 30 seconds to dry, with a towel, so – one excuse down. It’s still going to take a major shift in habit and thought to get back into a regular exercise routine, but my body has been trying to tell me that it is time. The increasing frequency, variety and intensity of various aches and pains that make me feel decades older than I am have been turning up the volume on this message, and I am finally paying attention.

The second reason for the big change is more symbolic. I like to have physical, external reminders of ideals, values, and goals. This is why I have tattoos, and why the few pieces of jewelry that I occasionally wear are all versions of symbols that have personal significance for me – peace signs, ohm characters, miniature prayer wheels. Seeing this short hair in the mirror every day will be a reminder of the other changes I want to make, of my desire and commitment to pay attention, live deliberately.

On a more specific symbolic level, leaving behind this long hair, which I’ve lived with for about 18 years (since it grew out after I shaved my head upon turning 30 – a topic for another post, perhaps), is also a reminder of the other things I want to leave behind: regrets; resentments; cynicism; pessimism; general, irrational self-criticism (the internal, auto-response “loser!” that still jumps up in my head all too frequently, in response to the smallest mistake or failing). I’ll hang on to the more specific, rational self-criticisms, related to actions and mindsets that I really can and should change, but I hope my buzz cut can be a visual cue to help me push back against the vague and unhelpful negative self-talk.

And speaking of negative self-talk—here’s the story of how this “Day of the Haircut” went. I wanted to have “before” and “after” pictures, so I had Todd take a few shots of me with my hair down. I looked at the photos on the camera to make sure they were ok, then I went for a nice, long walk. As I walked, I kept thinking about those photos, and I got just a little bit sad. I had looked at them and thought, “my hair is pretty” and I had some moments of self-doubt about this plan. I remembered all of the times in my life when I was convinced that my hair was the only pretty thing about me. And I thought about the various times when I had considered getting a shorter cut, but kept the long hair because it was my least-objectionable distinctive physical trait. I have thought, many times, that it is handy to have long red hair, because then, if anyone ever needed to describe me or identify me to some other party, they might be more likely to say, “the woman with long red hair” instead of, for example, “the short, pudgy woman” or “the pasty woman with crooked teeth and no visible eyelashes.” How much have I been using my hair as a way to hide, to avoid my own insecurities?

I wondered  how much my hair is part of my identity, and how much appearance, in general, contributes to our sense of self. I thought about Maya Angelou’s comment, when Chris Rock interviewed her in his great documentary, Good Hair. As she explained her reasons for keeping her hair natural and long, she said, “A woman’s hair is her glory,” in that regal, convincing Maya Angelou way. And I second-guessed this decision. I tell myself that I don’t care much about appearance. Like every other value I have, this one has both noble and crass roots. On one hand, I really do believe that going without makeup most of the time and refusing to spend much money on stylish clothes or sharp hairstyles is a way to resist the larger culture’s insistence on valuing people, women especially, based on appearance. I sometimes think about wearing makeup more often, but then I think, “this is how I look. Why isn’t this good enough?” On the other hand, this grand cultural-political statement may simply be an outgrowth of my basic laziness and cheapness. I do love the fact that I rarely spend money or time on cosmetics and other beauty-enhancing products. (’Cause I need all that extra time to take Buzzfeed quizzes and catch up on Parks and Recreation on Netflix.)

Ultimately, though, this decision, this year, this blog are about change, growth, and deliberate living. So, I went to Headz Up, the strip-mall hair salon where I take my boys to get their hair cut, and where I have had the ends of my hair trimmed about three times a year. The stylist seemed just a little concerned when I told her we were taking it all off, go ahead and get out the clippers. I assured her I had given this a lot of thought, and on we went. As she worked, a favorite song ran through my head – “Lighten Your Load” by the kids’/folk music duo, The Okee Dokee Brothers. The last verse and chorus are:

After the doubts that had surfaced on my walk, I was relieved that the actual experience of having all that hair buzzed off felt easy and positive. I like the way it looks and feels, and so do Todd and the boys. I don’t want to just go on, letting life flow over me, and I am going to use this external marker of change as a type of talisman as I move forward, with a lighter load. 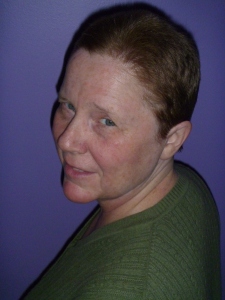 5 thoughts on “Lightening My Load”